Newbold: reNewbold a ‘Game-Changer’ for Neighborhood

“From a socioeconomic perspective, this is the most significant project to happen west of Broad Street in 50 years.”

Despite a barrage of snowstorms and nearby gas leaks this winter, LPMG Companies’ reNewbold project at 16th and Moore streets still has Fall 2014 in the crosshairs as a completion date, with the nine-home-construction Phase 1 beginning to wrap up this spring. 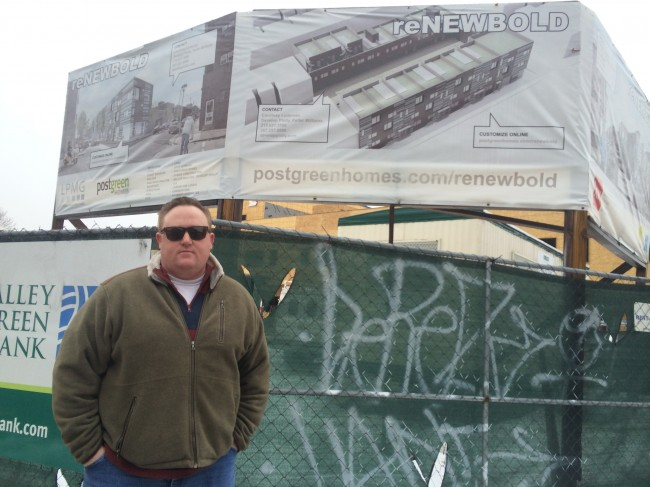 The median-income-targeted housing development broke ground in October and is expected to be LEED Platinum certified – a four-tiered ranking system of environmental-friendliness by the U.S. Green Building Council, based on the standards of the U.S. Environmental Protection Agency. Platinum is the highest ranking possible, boasting 80 points or more on a 100-point meter.

The reNewbold homes, if granted the certification, would be the first to be LEED-certified south of Washington Street.

But designed as a money-maker or not, the reNewbold project continues to be touted as the largest private investment in Southwest Philadelphia in five decades – a fact John Longacre [LPMG Companies President] isn’t shy about making well-known.

“It’s an absolute game-changer,” Longacre said. “From a socioeconomic perspective, this is the most significant project to happen west of Broad Street in 50 years. LPMG believes in west of Broad Street — Newbold in particular. And the reason why this is a game-changer, is because … this isn’t looked at as a transitional neighborhood anymore. Award-winning businesses are here, and LEED-certified [homes] are here. Some people are coming from Center City and the suburbs. Ten years ago, we couldn’t attract Northern Liberties or the suburbs into here. With this, we can substantiate that this neighborhood is different and has new populations and isn’t just slumlords and traditional residents.”